Apple announced that iPhone will deliver significantly longer battery life when it ships on June 29 than was originally estimated when iPhone was unveiled in January. iPhone will feature up to 8 hours of talk time, 6 hours of Internet use, 7 hours of video playback or 24 hours of audio playback. In addition, iPhone will feature up to 250 hours-more than 10 days-of standby time. Apple also announced that the entire top surface of iPhone, including its stunning 3.5-inch display, has been upgraded from plastic to optical-quality glass to achieve a superior level of scratch resistance and optical clarity.

With 8 hours of talk time, and 24 hours of audio playback, iPhone’s battery life is longer than any other ‘Smartphone’ and even longer than most MP3 players,” said Steve Jobs, Apple’s CEO. “We’ve also upgraded iPhone’s entire top surface from plastic to optical-quality glass for superior scratch resistance and clarity. There has never been a phone like iPhone, and we can’t wait to get this truly magical product into the hands of customers starting just 11 days from today.” 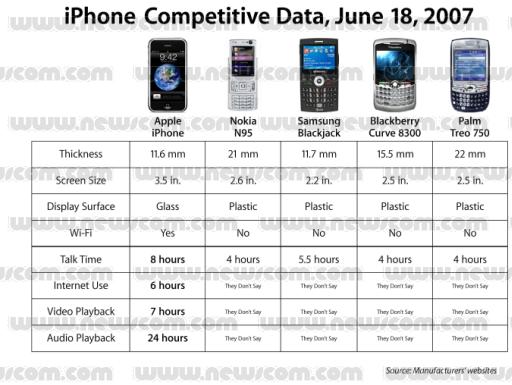 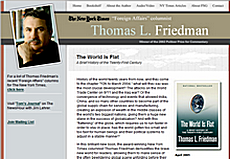 Thomas L. Friedman, New York Times columnist and author of best-selling book The World Is Flat: A Brief History of the Twenty-first Century, has inked a deal with MSNBC for a new online program anchored on his bookâ€™s theme. Launch date is on September.

To quote from his personal site, The World is Flat is â€œis the timely and essential update on globalization, its successes and discontents, powerfully illuminated by one of our most respected journalists.â€

This news site highlights video interviews about newsmakers of globalization. Friedmanâ€™s first guest is Bill Gates and MSNBC will supplement these interviews with related articles and social networking feature to enable avid readers to share their opinions and raise their questions.

“We felt we needed a strong branded content experience targeted at a sophisticated, business-minded audience,” he said.

Jupiter Research, an authority on the impact of the Internet and emerging consumer technologies on business, has found that the Internet continues to rival TV for consumers’ time while print media suffers the effects of online media usage. According to a new report, “Media Consumption Patters: Online Vies with TV As Primary Medium,” online users spend as much time online as they spend watching TV, while users under the age of 35 spend more time online than on TV.

Both TV viewing and online use have increased during the past five years, although usage appears stabilized. Consumers say they spend over ten times as much time with TV and the Internet as they do with print media like magazines and newspapers. Despite this trend, however, advertisers continue to spend disproportionately on print, with newspapers garnering nearly three times the expenditure of online. Money spent on television advertising remains the clear leader among the marketing mix with advertisers spending four times as much on TV advertising as all online advertising.

“Neither relatively better targeting nor the increasing availability of branding-friendly rich media and video inventory have led to any demonstrable online cannibalization of TV spending, ” said David Card, Vice President and Senior Analyst at JupiterResearch. “But that’s partly because over half of users’ time online is spent in communications, like e-mail and instant messaging.” The complete findings of this report are immediately available to Jupiter Research clients.