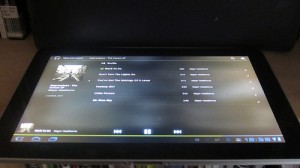 Google Music is still in its beta and not a lot of people are getting it as yet. Itâ€™s not even available in other countries. But the guys at Google still want more people experience what they think may be a game changer in entertainment and cloud computing so they have finally released a version that is compatible with Appleâ€™s iOS.

The new version of Google Music can be accessed on devices that carry iOS. But this is not a completely separate app â€“ the access will go through the Safari browser. This is a mixed bag for some people. Others prefer a separate app so they can access Google servers even without the browser, while others want their access to be done through the browser so they wonâ€™t have to install any extraneous apps.

The browser interface actually acts similar to an app. Users can slide between the songs and as a nifty feature, the songs you are playing will continue to do so even when the browser is closed. Of course, browsing through the library and searching for songs can be done through the browser as well.

Google just got a huge userbase with the city of Los Angeles equipping its employees with Google Apps which they can use for email Â and collaboration in the cloud. Â Starting today, more than 34,000 city employees will have access to various Google tools and services provided by Google Apps’ suite of collaborative technologies.

The decision to adapt Google Apps was made by the city’s CTO Randi Levin and her team at the city’s Information Technology Agency. The group evaluated 14 proposals but found Google Apps to be the most practical and most suited for the employees needs.

Employees will also have access to collaboration technology including facility to share docs, sites and videos which employees can edit simulataneously in the cloud. Â The City is hoping that the use of Google Apps will help the employees run the City smoothly and efficiently.

But the bottomline of course is the fact that aside from Â implementing a robust information technology strategy, itÂ actually lessens the cost the City will be spending on its IT infrastructure. And consistent uptime is almost assured being hosted in Google’s cloud.