Last.fm, the online social music network, announced a new global content agreement with Sony BMG Music Entertainment. As part of the agreement Sony BMG’s extensive catalogue of recordings, which includes some of the most popular artists of today, as well as classic tracks from some of the greatest artists of all time, will be made available to the 20 million users of Last.fm’s online radio streaming service.

As well as listening to their established favourites, users in the Last.fm community will now be able to discover new artists from the Sony catalogue through its unique recommendation system. The addition of such a major catalogue boosts Last.fm’s mission of building the biggest and best online music community, as it takes their already unrivalled music database to another level.

“This partnership affords Last.fm users a whole new set of terrific content for building community. We’ve always aimed to have everything ever recorded available to listen to on our site, and having access to Sony’s collection of some of the world’s most popular music takes us another huge step closer,” Martin Stiksel, Last.fm co-founder, said. 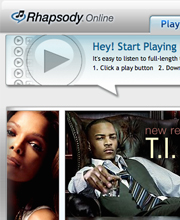 The launch of this robust lyrics feature makes Rhapsody Online the only website offering consumers complete and accurate lyrics alongside free playback of full songs on-demand.

“Lyrics are a tremendously popular and vital component to creating a complete online music experience for consumers,” said Darryl Ballantyne, LyricFind’s president & CEO. “We are thrilled to be working with RealNetworks to deliver this safe, legal and free way for music fans to find and enjoy the content they’re looking for with Rhapsody Online.”

Rhapsody Online’s lyrics are provided through LyricFind’s continually growing database of licensed content from a stable of over 1,800 major and independent music publishers that includes EMI Music Publishing, BMG Music Publishing, Universal Music Publishing, Famous Music and Cherry Lane Music among others. Music fans can search for lyrics by artist name, song title and phrases, making it simple to find songs knowing just a snippet of the chorus.

The new music service is integrated into the SMS, a proprietary, Samsung- developed media player for Samsung’s devices. Prior versions of the SMS will have the new features integrated following an automatic software update. The SMS will offer portable music subscriptions, allowing unlimited downloads to Samsung portable devices for a flat monthly fee, or the purchase of individual tracks or albums.

According to the related agreement, a selection of Chinese language music from RMG’s repertoire will be made legally available for streaming at no charge to all users of Baidu. Internet advertising will be displayed while users listen to music licensed under the agreement. The two companies will share revenue generated from the advertising and will continue to work together to explore new opportunities in advertising-supported online music distribution. 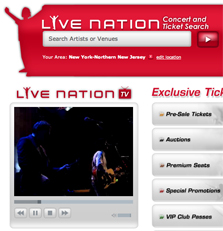 Live Nation announced the extension of its successful web platform to the company’s UK website.

With a brand new, globally consistent design, LiveNation.co.uk will continue to offer fans a powerful concert search engine complete with separate festival listings, as well as an online merchandise store with products from over 2,000 artists. In addition, the site will offer registered ticket club members access to buy tickets before they go on sale, as well as access to premium seats.

The platform for the new site is an extension of Live Nation’s highly successful LiveNation.com destination, which along with its other company sites have been ranked number two amongst event sites by Nielsen/Net Ratings in the United States.

The company expects to roll out the new web platform throughout Europe in 2007, including The Netherlands, Italy, Denmark, Norway, Sweden, Finland, Spain, France, Belgium, Poland, The Czech Republic and Hungary.