Kaboose, the largest independent family-focused online media company in the U.S., has acquired Bounty.com, a leading family destination and parenting club online in the UK, for $140 million.

Hopefully, this will give the Toronto-based company a better fighting chance against established players in the family-friendly demographic like Nickelodeon, Walt Disney, and J&Jâ€™s BabyCenter.

However, both parties declined to deal with the media until the equity-refinancing deal for $115 million is completed.

Why $140 million? Bounty.com is not only the largest parenting club in the UK with 2.4 million members but also the largest database of young families in Europe. Not to mention its strong partnerships with leading multinational companies like P&G, Unilever, J&J, and Kimberly-Clark.

The Wall Street Journal Online has announced a new program that will enable its users to submit WSJ.com articles to Digg, the popular news and content sharing website, and allow Digg users to view content currently available to WSJ.com subscribers.

Every article on The Wall Street Journal Online will now include a “Digg This” icon in the article tools section that enables users to Digg the article directly from WSJ.com, and view the “Recently Popular” and “Upcoming” WSJ.com articles as they surface on Digg.

In addition, users clicking on a Wall Street Journal article link on Digg will be able to read that article for free on WSJ.com.

Moreover, Rupert Murdoch intends to remove the subscription fees of this popular online newspaper. Following the new business model of the New York Times, the objective behind this move is to increase readership from a mere 1 million to 20 million. Consequently, this will boost advertising revenues.

Zinio LLC, the digital publishing and distribution platform for magazines and books, has extended an agreement with international multimedia entertainment company Playboy Enterprises, Inc. to build, host and maintain the “Playboy International Newsstand,” a single repository containing all of Playboy’s domestic and some of its international editions. Effective today, current and archived editions will be available at www.playboy.com/globaldigital.

Already the provider of the Playboy’s U.S. digital edition, Zinio has delivered over a million digital issues of the magazine and is responsible for a significant percentage of sales outside the U.S. With 20 percent of current international customers purchasing more than one Playboy product, Zinio’s platform allows Playboy to easily and cost-effectively maximize sales opportunities globally. 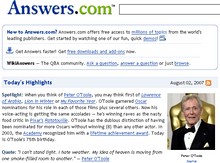 Answers.com, an award-winning information portal, has seen a 28% drop in search engine traffic starting last week due to a search engine algorithmic adjustment by Google.

“The major search engines modify their algorithms all the time,” said Bob Rosenschein, CEO. “This change only demonstrates the sound business rationale behind our agreement to purchase Dictionary.com, because it underscores a primary motivation for the deal: to secure a steady source of direct traffic and mitigate our current dependence on search engine algorithms.”

BBC, one of the biggest broadcasting corporations in the world, has launched to the general public its own on-demand TV service, BBC iPlayer.

This new service allows viewers to download programs for the last 7 days and will have the opportunity watch them for up to 30 days. Once watched, these programs will be automatically deleted.

However, it is still in its beta phase and full marketing is slated in autumn. Interested viewers need to register at the site to get invitations.

“It’s a revolutionary service which offers audiences more value, because from now on they never have to miss out on their favourite programmes â€“ or those that they didn’t previously have the opportunity to try,” said Jana Bennett, Director of BBC Vision.

BBC iPlayer is far more than a standalone application. Later this year, it will become widely accessible across bbc.co.uk, as well as via links from YouTube and a number of other potential distribution partners. These potential partners include MSN, telegraph.co.uk, AOL, Tiscali, Yahoo!, MySpace, Blinkx and Bebo.