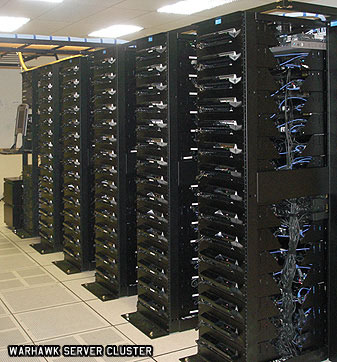 Ah, the Sony PlayStation 3. A Blu-Ray player, an online video player, a Linux box — it’s used as anything but what it’s supposed to be: a game console. Now the US Air Force is buying 2,200 PS3s to build a supercomputer.

No, I’m not kidding.

The U.S. Air Force is looking to buy 2,200 Sony PlayStation 3 game consoles to build out a research supercomputer, according to an document posted on the federal government’s procurement Web site.

The PlayStation 3s will be used at the Air Force Research Laboratory’s information directorate in Rome, N.Y., where they will be added to an existing cluster of 336 PlayStation 3s being used to conduct supercomputing research.

The Air Force will use the system to “to determine the best fit for implementation of various applications,” including commercial and internally developed software specific to the PS3’s Cell Broadband Engine processor architecture. The research will help the Air Force decide where Cell Broadband Engine processor-derived hardware and software could be used in military systems.

You might think that Sony’s the big winner in this deal, and that the Air Force is stupid for buying thousands of overpriced game consoles. You’d be wrong, on both counts. Sony sells PS3s at a loss, hoping to make their money in games and accessories. That means the Air Force is getting Cell hardware for a fraction of the cost. END_OF_DOCUMENT_TOKEN_TO_BE_REPLACED

From eight-foot demo units to the Microsoft Surface to the iPhone, multitouch technology has experienced rapid miniaturization over the last two years. Now we go completely in the opposite direction, with the world’s largest multitouch wall. This tactile monster by Sensory Minds covers an astonishing 425 square meters. That’s around 6,000 times the size of your computer’s monitor.

A screen resolution of 34 megapixels created by 15 HD projectors makes for awesome images, while 30 directional speakers provide 3D aural immersion. If you’d like to see, hear, and touch it all for yourself, this baby’s installed at NÃ¼rburgring, a race track around the village of NÃ¼rburg, Germany.

The front-facing camera on my Nokia feels as useless and disappointing as the Nokia app store. Since Skype is my primary VoIP service, the latest version of Fring should ease that disappointment.

Don’t you just hate when marketers tag you in some spammy promo picture on Facebook? Yeah, so do I. Ad agency Forsman & Bodenfors realized this, and found an interesting way to get around it for their client Ikea: get users to tag themselves in Ikea promo pictures. END_OF_DOCUMENT_TOKEN_TO_BE_REPLACED

The interactivity of new media allows levels of deeply personal engagement unimaginable in old media. In the case of one avid Japanese gamer, that engagement actually led to marriage.

…a man named Sal9000 married the love of his life. Her name is Nene Anegasaki, and she lives inside of a Nintendo DS video game called Love Plus. The wedding took place during a Make: Japan meet-up held at the Tokyo Institute of Technology. In attendance were a live audience, an MC, the bride’s virtual video game girlfriend â€” who made a speech â€” and a real human priest.

Then they’d be able to nag you like only a real wife could.