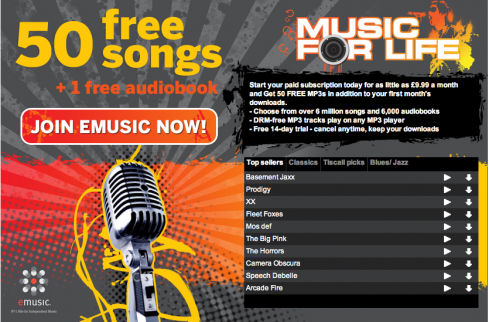 It can boast this number of tracks because it has partnered with eMusic. That means you won’t necessarily get all the latest tunes as you might on services like iTunes, but still have access to a decent range of music. END_OF_DOCUMENT_TOKEN_TO_BE_REPLACED

Proposals to cut off people who persistently download files illegally from the Internet have been washing around for several years now, but today Lord Mandelson, the UK government’s secretary of state for business, innovation and skills, laid out plans to introduce tough measures to combat illegal filesharing.

Opposed by leading ISPs, who fear that they will be forced to introduce costly and inconvenient monitoring and recording systems, Lord Mandelson did say that he had “no expectation of mass suspensions”, instead outlining a “three strikes” approach whereby persistent offenders would still have the right to appeal if cut off from the Net. END_OF_DOCUMENT_TOKEN_TO_BE_REPLACED

In a move described as â€œnext generationâ€, Tesco (UK retailer) and Microsoft have announced a new deal whereby customers buying selected DVDs from Tesco stores will be able to download a digital copy of the same film.

Using Microsoftâ€™s Silverlight technology, and with the backing of major film studios, this digital copy will be downloadable to either PC or Mac, offering a â€œvirtual DVD experienceâ€ and promising a range of additional features including auto-updating trailers, exclusive bonus content, online chat and related merchandising.

Get your street smarts on with “American Gangster,” get sarcastic with “Juno” or get creeped by “Cloverfield” – all without the wait.