MySpace revealed the results of a recent movie exit research study conducted for them by The Nielsen Company, which said that MySpace is the most frequently cited web source of information among consumers 15-24 years onle. Forty-two percent of consumers 15-34 years old that viewed information and/or ads for the films on the web viewed those promotions on MySpace.

Nielsen compiled results of this study using an in-theatre methodology during the opening weekend of 13 major Hollywood studio and independent film releases over the past two years. Movie titles included The Omen, John Tucker Must Die, Step Up, Jackass Number 2, Employee of the Month, 300, Redline, Bratz, Sydney White, Step Up 2: The Streets, Forgetting Sarah Marshall, Get Smart, and The Dark Knight. All films collectively grossed approximately $409 million in opening weekend box office revenue. 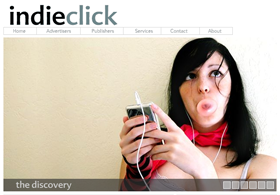 Personalized radio service Pandora and online community for movie fans Flixster are both joining Indieclick, a publisher network that targets the youth market.

These new additions grow IndieClickâ€™s targeted network of more than 200 film/entertainment, music, culture and community destinations to more than 50 million unique visitors who generate more than 2.5 billion impressions per month.

The bottomline here is more reach for advertisers since IndieClick’s network is targeted on the most receptive audience in the areas of music, film, and entertainmentâ€“ the youth.

Looks like couch-jumping fanatics and SPs (Suppressive Persons) all have a place to unite. Welcome to the newly launched TomCruise.com.

Coinciding with the 25th anniversary of the release of the movie that put Cruise on the map, Risky Business, the Website offers
video reels and movie clips spanning TC’s career.

Love him or hate him, I personally find it amazing that he’s never leveraged the power of his name dot com before. You can expect news, updates and photos, but the primary focus right now is on movies – Cruise’s true passion.

Of course, it’s smart for him to have an online vehicle to be able to address rumors as they happen.

TomCruise.com launches in about three hours (9am PT). Look for it to become a major Web hot spot in the coming weeks.

Get your street smarts on with “American Gangster,” get sarcastic with “Juno” or get creeped by “Cloverfield” – all without the wait.