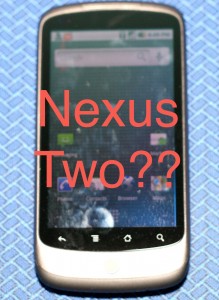 When the Google Nexus One was released it was expected that the phone despite having a touchscreen feature would lack one importantant and most sought after functionality – full multitouch feature with gesture like pinch-and-zoom control. But of course, Google will not want to get into trouble and put the feature on the Nexus One since Apple has patented the technology. So, we have to contend with the “-” and “+” zoom control in the Nexus One.

But this didn’t stop the folks from XDA-Developers though and worked doubly hard as soon as they got hold of their Nexus One units and now has finally released a Nexus One add-on that would enable full multitouch gesture like pinch and zoom, on the phone’s native browser at least.

Sounds exciting right? While I don’t really know the merit of this thing, still some of you might want to try this one out. Be forwarned though the the procedures outlined by the XDA Developers might accidentally brick your Nexus One. So, exercise extreme caution.

In addition, the said Nexus One add-on requires rooting of your Nexus One first. As soon as you’ve settled with that, here are the steps on how to enable multitouch functionality on your Nexus One’s browser. Good luck!

Step 1: Follow the step by step guideÂ posted here to root your Nexus One if you havenâ€™t already.

Step 2: Download all the requiredÂ files for Nexus One multitouch add-on from the source linkhere.

Step 4: Thatâ€™s about it! Once your phone has rebooted, run the browser to try out all the multitouch goodness! 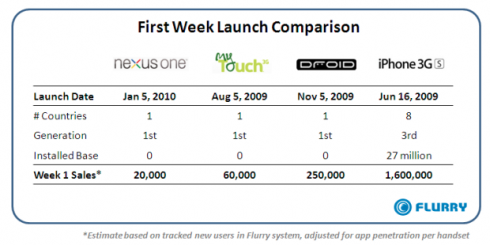 With the fact that the Nexus One is only available through Google’s online store and only in four countries so far, it’s not surprising that Google was able to sell only 20,000 units of the phone. The report was made by Mobile-ent.biz basing from data it obtained from app analytics Flurry and covers the first week of Nexus One’s availability.

Comparing this with the sales performance of the iPhone 3GS which stands at 1.5 million units, it is easy to say that Google may have failed on this one. Even the Motorola DROID, beats the Nexus One big time, with its 250,000 units first week sales.

So, what went wrong? Did Google fail this time? Â The numbers certainly don’t lie. But then, aren’t we supposed to put into consideration several variables first before comparing the first week sales of the Nexus One, iPhone 3G, Motorola DROID and even MyTouch 3G, the first Android phone.? Most certainly.

First things first, all mentioned smartphones were released with their own mobile carriers releasing and distributing them. In the case of the Nexus One, Google is the sole distributor of the unit. And besides, it is only available in four countries – U.K., U.S., Hong Kong and Singapore. A significant number of mobile phone users, who may be eager to purchase could not do so because the Nexus One was not available in their countries.

Hopefully, once Google make the Nexus One in more countries, the figures will improve.

But if not, then that’s the time when we could say that Google failed. But only on its first mobile phone venture. Not the whole Android phone business per se. Because, certainly there will be another Google phone, perhaps the Nexus 2 or Nexus 3 and so on.

Saying that the Nexus One failed because its first week sale was too low is still an unfounded conclusion. END_OF_DOCUMENT_TOKEN_TO_BE_REPLACED

There you have have it folks, as promised – Â Google has officially announced the Nexus One, perhaps the iPhone’s biggest threat. And to make this product launch a little something different from just your ordinary product launch, Google is highlighting the fact that the Nexus One is just the first mobile phone that it plans to market through its mobile phone web store.

The Google hosted mobile phone web store aims to give consumers, that means us a new way to purchase a mobile phone. Specifically, Google wants to connect online users with selected Android devices, which in this case for starter is the Nexus One. Google wants to make the purchasing process simple. Â Unfortunately, the first thing that will great you if you’re not from the U.S. is a note that says – “Sorry, the Nexus One Phone is not available in your country.” Common Google, are we non-U.S. folks not part of these mobile phone consumers?

Anyway, going back to Nexus One, which Google is calling as a “superphone”, true to what you’ve might have read from unofficial information, reviews and photo leaks the Nexus One will have a large 3.7-inch OLED screen with deep contrast and brilliant colors display capability, a 1GHz Qualcomm Snapdragon chipset, Android 2.1 OS, voice-enabled keyboard, live Wallpapers, 3D photo gallery, and Google’s own mobile phone apps such as Gmail, Google Voice and Google Maps.

And now for the most important information, how much would the Nexus One cost you? Â You can either get the subsidized unit under T-Mobile for $179 or unlocked version for $529 which will ship in the U.S., U.K., Hong Kong, and Singapore. 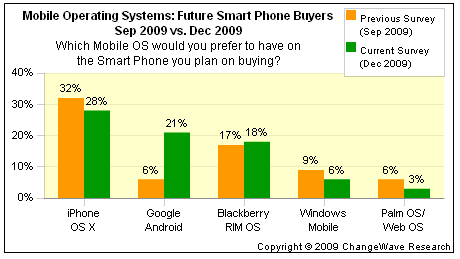