Online advertising in the US is expected to grow bigger than newspaper advertising by 2011, as shown in the annual media research report by Veronis Suhler Stevenson (VSS).

In the study, VSS predicts that online advertising will increase by over 21% per year, totalling to over $62 billion by 2011, a few billion dollars bigger than newspaper advertising which is expected at $60 billion. Broadcast, cable, and satellite TV advertising still takes the biggest slice of the cake, foreseen to reach $86 billion.

â€œThe path of online advertising and newspaper advertising is a continuation of what weâ€™ve been observing for many years, but it is finally getting to the point where the lines will cross,â€ said James Rutherfurd, managing director at VSS.

As Americans spend more and more time online, one can’t help to ask if this gradual shift to digital media be the gradual death of newspaper production. Are we finally saving more trees?

“This is a politically and technologically engaged demographic and our goal is to attract new viewers and increase awareness of Current TV’s user-generated short-form programming,” said Scott Symonds, Executive Media Director, AKQA. “We want to encourage viewers to join the conversation by submitting content via current.tv, get it on TV and get paid for their work.”

Qmecom announced the launch of its Personalized Video Advertising Platform which enables advertisers to customize each and every online multimedia advertisement to fit the profile and preferences of individuals, helping agencies and web publishers maximize the relevance of ads to consumers and boost response rates.

Qmecom seamlessly creates personalized versions of video and rich media ads, solving the key industry challenge of how to create the enormous volume of advertisements required for a specialized campaign, without compromising the creative idea central to the communication, quickly and cost-effectively.

Qmecom’s patent-protected platform is superior to competitive solutions as there are no limitations to how an ad can be personalized to fit profile and preference parameters of individual customers. If the data profiles can be optimized, Qmecom can customize any creative element, rendering millions of unique versions of a single ad on the fly based on the data profiles. The application can personalize images, video, text, music, voice, animation and graphics matched to a targeted consumer or consumer group based on their preferences and needs. 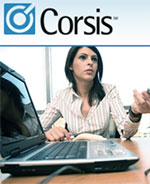 TheStreet.com announced today its acquisition of Corsis, a leading provider of advertising, marketing, and publishing solutions, for approximately $20.7 million. This acquisition also includes Promotions.com, an online promotions company that develops interactive advertisements for some of the most popular brands we know.

â€œAdvertisers are asking for more than search and banner campaigns,â€ said Thomas J. Clarke Jr., chairman and chief executive officer of TheStreet.com. â€œThe acquisition of Corsis and Promotions.com will address our advertisersâ€™ demand for more integrated marketing campaigns that are being requested of all publishers. This acquisition will provide us with a robust technology platform, setting the foundation for the integration of future acquisitions, and we expect that it will allow us to expand our gross margins.â€

TheStreet.com has been known to provide financial commentary, analysis, research and news and is looking towards expanding its advertising offers.