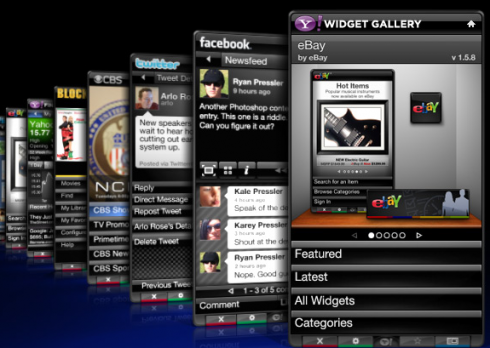 For its share of the news in the ongoing CES 2010, Yahoo is spiking up the delivery of web content through its Widget Engine for connected TV. Yahoo has announced partnership gigs with various consumer electronics companies including Samsung, Sony, LG Electronics and VIZIO. In addition, Yahoo has also teamed up with Intel to make its Widgen Development Kit available to developers to bring in more Internet-TV applications.

Yahoo’s TV widget brings popular Internet services and online media to reach viewers with applications specifically tailored to the needs of TV watchers. In other words, it’s like having a multimedia hub that you control on your TV screen. If you’re a couch potato like me, you’d definitely want to try this one out. That is of course if you have the supported consumer electronic products from the brands we mentioned awhile back.

And to make the user experience even more exciting and fun, Yahoo has also released the Widget Development Kit containing the Yahoo Widget Engine. Â This WDK uses industry standard tools such as Javascript, XML and HTML to make it easy for developers and manufacturers to develop and deploy TV widgets of popular Internet services. Â If this is the part of this news that interest you, check out more about the WDK here.

So, there. CES 2010 certainly brought us many new options for home entertainment. Â Which is going to be for you? Boxee Beta? Boxee Box? Pophub Box or Yahoo Connected TV? Mind you, these are just some of the new options that you can use to spice up your home entertainment system. There are definitely many more which were announced at the CES 2010.

Boxee Beta from boxee on Vimeo.

After several months, social media center Boxee is finally available in beta. Boxee lets you play media from your computer and other devices in your home network as well as stream or download moviews, tv shows, Â music and photos Â from Internet sources to your TV. Â If you don’t want to buy the Boxee Box which was launched recently, the Boxee software will allow you to do all the things you can do with the Boxee Box using your computer.

To kickstart the release of Boxee Beta, which you can download right now here, Boxee has also snagged partnerships with several content providers including TV.com, Blip.tv, Â and IGN. TV. com has several great shows including Family Guy, Heroes and more. Blip.tv is a great source for independently produced content and IGN is of course for gaming content. Â In addition, Boxee is also bringing in an app for the upcoming awesome movie Wolfman.

Boxee Beta is available for Windows, Linux and of course Mac OS X. For more details on what Boxee can do, check out an earlier post from the Boxee blog.

To get started using Boxee, you need to sign-up at this site, grab the software, connect your PC to your TV or get wait for the D-Link Boxee Box to be released, grab a popcorn and then sit back, relax and enjoy watching media content on your 32-inch HDTV. 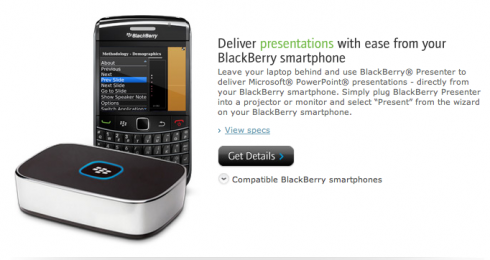 RIM has just launched it latest smartphone accessory, Â the BlackBerry Presenter – a small and light device that you can easily plug into a projector or monitor to display a Microsoft PowerPoint Presentation. You then control the presentation using your BlackBerry phone. Sounds cool? It certainly is, handy and useful as well.

The BlackBerry Presenter has the following specs – supports NTSC and PAL video formats, S-Video and VGA video cable, micro USB connection, and support for various display resolution – VGA, SVGA and XGA. It doesn’t need any additional file processing as you can do your presentations directly without tweaking your presentation on your PC.

No details on availability yet, but if you’re keen on getting the BlackBerry Presenter, it will set you back for $199. Â It works with most BlackBerry models except BlackBerry Curve series and BlackBerry Pearl Flip series. 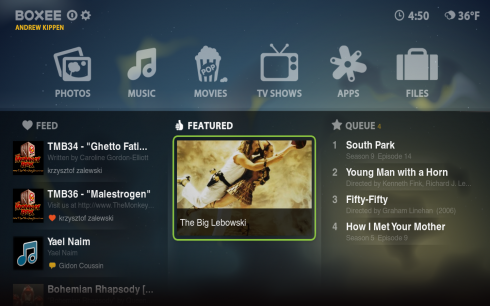 It looks like CES 2010 will be dominated not only by netbooks and tablet PCs, and e-book readers but also of multimedia entertainment hub that brings various content from multiple devices to home TV viewing. Â We’ve covered AXAR technology and Popbox Hub recently, and now here comes another one straight out of CES 2010 announcement – D-Link Boxee Box.

The Boxee Box brings movies, TV shows, music and photos from your computer, home network, and the Internet to HDTV. Aside from this, Boxee Box also has social networking features including direct access to Facebook, Twitter and other social networking sites.

The Boxee Box takes the popular PC, Mac and Linux software in the form of a HDTV device to bring access to a huge library of content direct from the Internet. You can also add your own content through RSS or XML feeds. Users will also have access to music sites including Pandora, last.fm, shoutcase and We are Hunted as well on photo sites such as Flickr, Picasa and Facebook.

In addition to Internet content Boxee Box also works with your digital media content that you have accumulated on your computer hard drive or home network. It finds relevant cover art, synopses, reviews, and other information about your digital content to form your multimedia libraries.Boxee Box supports various formats as well and supports Wi-Fi 802.11.

Boxee Box is expected to ship later this year.

As if awakening from a deep slumber, Skype suddenly comes back to life and announced just in time for CES 2010 their latest offering – 720p HD video calls on Windows PC as well as Skype enabled-HDTVs. Â Oh wait, are you still using Skype? If yes, then read to find out what these announcements are all about. If you’ve stopped using Skype a long time ago, this might be the right time to start using it again.

Although not really a full 1080p, Skype’s new 720p HD-quality video calling feature at 1280×720 resolution and up to 30 fps is enough to give you smoother and richer video calls. Â To use this feature, you need a new HD webcam, PC with at least 1.8GHz dual-core processor, high-speed broadband connection and of course Skype 4.2 Beta for Windows. In case you’re wondering what HD webcams to get, be sure to check out announcement from faceVision and InStore Solution during the CES 2010. These two manufacturers are said to be coming out with new HD webcams that will work fine with Skype. These webcams will set you back for around $99 to $140.

Now this one made me feel bad since I just bought a 32-inch Samsung HDTV. I should have waited for LG and Panasonic’s new HDTV models that will have an embedded Skype Software. Anyway, Skype’s video calling on HDTV will let you do the following:

Are we all excited about this now? I do hope so that this new features will revive the sparkle that Skype once had.