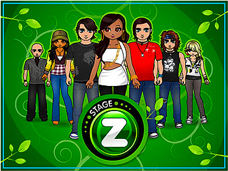 “Global warming is an issue that we need to confront, and I am proud to do my part to help today’s teens understand the dire consequences of inaction on this issue,” said Kelly Rowland. “Hosting at Stage-Z in Zwinktopia is an innovative way for me to spread this message to the online community.”

In conjunction with The Alliance For Climate Protection, Stage Z will broadcast in Zwinktopia, a virtual world for the more than seven million Zwinky avatars worldwide. Stage-Z will feature a 24-hour block of music videos, interviews, comedy, short films, and exclusive programming from today’s top hip-hop, rock, pop, electronic, and metal artists as well as celebrity DJ’s, comedians and actors.

The event will coincide with Live Earth, a 24-hour, 7-continent series of 9 concerts taking place on July 7th that will bring together more than 100 music artists and 2 billion people to trigger a global movement to solve the climate crisis.

The Stage-Z Concert will be held in the new outdoor amphitheatre in Zwinktopia built especially for the event. 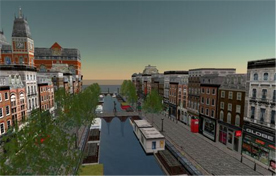 3dutch.com, a 3D-platform of the Dutch-based company Boom BV, today announced that it has acquired the virtual city of Second Life Amsterdam. The site, formerly owned by Kevin Alderman or better known as Stroker Serpentine, placed the virtual city on sale two months ago.

“I am pleased we found a good company for my Amsterdam baby. Amsterdam started off 3 years ago and grew to one of the more busier places of Second Life. 3dutch will be able to bring Amsterdam another step forward in the virtual world of Second Life yet keep its identity in Second Life,â€ Alderman said.

“We acquired Amsterdam to gain experience with the virtual 3D environment on the Internet which is a completely new addition to our existing Internet activities. With the acquisition of Amsterdam, we can expand and built further one of the most exciting and entertaining platforms already out there on Second Life,” Stefan Rijkaart of BOOM BV said.

Social networking company Pringo.com announced their partnership with fix8, a new media company that provides rich, interactive media tools for user-generated content. fix8’s personal video authoring and Instant Message software will add even more features to Pringo’s extensive library of over 400 social networking tools. The fix8 partnership will allow Pringo’s clients to unlock a whole new world of user-generated reality across their online communities, enabling users to produce and animate video content that integrates the real world with a cast of virtual characters, accessories and experiences.

“Social networking with Pringo is in a league of its own because of offerings like the amazing technology from fix8. While online communities continue to thrive in this web 2.0 era, it is features like these that keep Pringo clients ahead of the curve. We anticipate a prosperous future with fix8 and are thrilled at the new opportunities that this partnership will create,” Pringo.com President Gary Hall said.

The BBC is set to broadcast its first ever full program in a virtual world this Friday. Virtual World, Real Millions will be shown simultaneously on BBC2 and at the Rivers Run Red Cinema in Second Life on June 1 at 7pm GMT.

The program looks at the growth of virtual worlds, wth Philip Rosedale, creator of Second Life providing commentary. It also features interviews with marketing company Rivers Run Red, which has amassed a multi-million pound turnover by trading inside virtual worlds, and the team behind Reebok’s virtual stores. 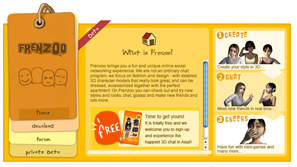 Ambient Sound Investments (ASI), established by the four co-founding engineers of internet telephony software company Skype, will acquire a stake as part of a Series A funding round in 3D social networking company Frenzoo, to bring to market an exciting new online experience across the region.

Frenzoo enables teenagers and young adults to connect with their friends and become budding fashionistas. Frenzoo users can express themselves by personalizing their own virtual 3D characters, and play mix-and-match with a variety of branded clothes, footwear, accessories, furniture and lifestyle items.

“We are attracted to Frenzooâ€™s unique technology and business modelâ€ said Toivo Annus, Managing Partner at ASI. â€œIntegrating 3D and social networking opens up a world of opportunities for both users and advertisers. Asia is a dynamic and growing market, and we look forward to helping Frenzoo bring this service to life.”