MapQuest, in partnership with Telmap, announced that the newest version of its voice-guided, GPS-enabled wireless application, MapQuest Navigator 5.0, is now widely available to consumers through a new direct-to-consumer storefront on MapQuest.com. Customers, including the 50 million monthly MapQuest.com users1, who sign up for new version 5.0 between now and December 31, 2007 can download the application directly to their handset and purchase the service for the promotional price of $4.99 per month for the life of the subscription. 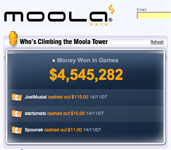 Moola.com unveiled the worldâ€™s first Massively Multiplayer Rewards Game (MMRG), combining a multiplayer game environment with an ad-supported cash rewards program. Mooola enables anyone to win up to $10 million in cash by playing and winning head-to-head matches, interacting with video advertising, searching the web, referring their friendsâ€“ and now by shopping online with the new BoosterBar browser companion. With over 175,000 registered members and millions of dollars up for grabs, Moola is leading the next evolution in the multi-billion dollar casual gaming industry.

The BoosterBar (which is available exclusively to Moola players) gives players the opportunity to collect and win Moola cash when they shop online and search the web. The BoosterBar makes shopping recommendations, displays available coupons and discounts at participating retailers, and ensures that players never miss an opportunity to collect rewards when shopping online.

ON Networks (ON), in partnership with South by Southwest (SXSW) Film Conference and Festival, will recognize the best in digital entertainment with the Greenlight Awards, a competition aimed at discovering the next great, original and episodic digital series. Submissions will be reviewed from December through February 15, 2008 culminating at an exclusive event during SXSW 2008, March 7-15. Detailed information about submission criteria and requirements, celebrity judges and other contest information will be available in early December on the SXSW and ON websites.

Unlike traditional television series, which are limited by broadcast schedules and narrow distribution, digital series vary in length and are available to consumers anywhere and anytime via the web, mobile devices, gaming consoles, IPTV and digital cable systems. As a result, digital series give advertisers, writers, talent and producers global access to potential audiences and a new revenue channel.

The winner of this new media challenge will be announced at the Greenlight Awards event during SXSW 2008, and will receive $10,000.00 cash and a distribution deal from ON.

Over 14 percent of the nearly $160 billion spent on consumer electronics (CE) over the previous 12 months was spent online, up from 5 percent in 2005, according to a study released by the Consumer Electronics Association (CEA). According to The State of CE Retail, CE products follow only books and clothing as the items most frequently purchased online. Desktop PCs, wireless phones and digital cameras emerged as the most popular CE products for online shoppers. The study also reveals that consumers are pleased with their online and in-store experiences.

A vast majority of consumers gave both the online (89 percent) and in-store (80 percent) experiences ratings of good or excellent, marking an increase for the web and consistent ratings for store-fronts. In particular, the brick-and-mortars demonstrated strong improvements in product information, wait times while in line and salesperson knowledge. Survey results show that selection and convenience are seen as primary benefits of purchasing consumer electronics online.

The growth of online purchasing also creates opportunities for traditional CE retailers. The study reveals that brick and mortar retailers are the most commonly visited sites by online CE shoppers. In addition, more consumers go online to research and compare prices and then buy in the store (47 percent) than vice versa (17 percent). A growing number of consumers (11 percent) are even going online and then picking the item up in the store, creating additional selling opportunities in the process.

Piczo announced its global expansion into Russia, one of the fastest growing social networking regions globally, with the launch of Piczo Russia.

The launch into the Russian market is part of Piczoâ€™s international growth strategy which has already seen exponential growth in Germany to over 2 million unique users today, up six-fold since September 2006. Recent launches into new markets have enabled Piczo to build on its position as the top destination for 13-18 year-olds with over 28 million registered users globally.

Piczo is already well established across Eastern Europe, where it now has over 850,000 unique users accessing the site with more than 65 million page views a month.

Piczoâ€™s focus on privacy and control has been an important product differentiator since the siteâ€™s creation. As Piczo users cannot search for others through the network, groups are formed more like a private party, with growth happening virally and through word of mouth.