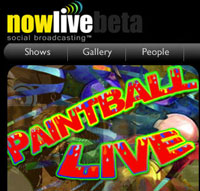 Federal court of appeals rejects webcasters’ motion to delay the onset of internet radio royalty rates passed by the Copyright Royalty Board early this year.

The new fees are set to kick in on Sunday as scheduled, as the webcasters’ party failed to “satisfy the stringent standards required for a stay pending court review.”

The Digital Media Assocation, headed by executive director Jonathan Potter, is hopeful that webcasters could still make amends with the music industry and the royalty board. In the meantime, Internet radio stations will be “forced to make very difficult decisions about what music, if any, they are able to offer. The result will certainly be fewer outlets for independent music, less diversity on the Internet airwaves, and far fewer listening choices for consumers.”

This agreement made by the Copyright Royalty Board requires internet radio stations to pay .08 cent per song played online, retroactive to 2006, which rises up to .19 cent by 2010. Also, stations ahave to pay a minimum of $500 royalty payment per channel. It was because of this that webcasters around the world staged a day of silence last July 26 as a plea for reconsideration.

CBS Radio’s Sports station improves its popular talk shows with interactive video streaming courtesy of Paltalk. Among these shows are The Mike North Morning and The Boers and Berstein which are aired at 6-10 am and 2-6 pm respectively.

This latest development allows listeners to participate through live video streaming so that they get to see both on-air personalities as well as other listeners who are viewing the videos too.

“We have been aggressive in implementing digital technologies into our everyday operations and our listeners have responded to all our initiatives with great enthusiasm,” Paul Agase, VP and general manager of the station, said. “Of all the ways our listeners have to connect with the station, live video streaming brings an entirely new level of engagement, which we are excited to offer.”

The regularly scheduled programming of millions of Internet radio listeners will be temporarily interrupted today with tens of thousands of U.S. webcasters observing a national Day of Silence. Protesting the recent 300 percent royalty rate increase for online music webcasters, the aim of the industry wide daylong blackout is to raise awareness of the threat these new rates pose to the future of Internet radio and rally support for legislation pending in Congress.

“Webcasters of every size and from every corner of the country will stand unite tomorrow to protest a very real and fast approaching threat to their livelihood,” said Jake Ward, a spokesperson for the SaveNetRadio Coalition. “With nearly a half million emails and phone calls from webcasters, listeners, and the artists they support sent to Congress in just the last two months, this national grassroots campaign has certainly captured the attention of lawmakers, but there is more to be done and time is running out.

The Coalition urges their listeners to contact their congressional representatives and ask them to support the Internet Radio Equality Act and preserve the future of Internet radio.

Internet-only webcasters and broadcasters that simulcast online will alert their listeners that “silenece” is what the Internet radio may be reduced to after July 15th, the day on which 17 months’ worth of retroactive royalty payments are due to the SoundExchange collection organization, following a recent Copyright Royalty Board (CRB) decision. 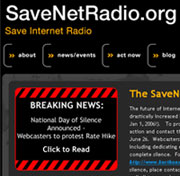 On June 26, thousands of webcasters will go silent and cut off the music in protest to the royalty rate increase by the Copyright Royalty Rate Board.

Some of the participants of this protest includes Yahoo, Rhapsody, MTV Online and Live 365.

“The arbitrary and drastic rate increases set by the Copyright Royalty Board (CRB) on March 2 threaten the very livelihood of thousands of webcasters and their millions of listeners throughout the country,”

“The campaign to save Internet radio — a genuine grass-roots movement comprised of hundreds of thousands of webcasters, artists and independent labels, and Net radio listeners — has quickly brought this issue to the national forefront and the halls of Congress, but there is still more to be done before the approaching deadline of July 15.”

On the SaveNetRadio website, countdown to July 15 starts, tagging that day as “The Day the Music Dies”. Internet Radio broadcasters are calling on Senators and Congressional Representatives to heed to their call and save the future of web broadcasting.

The decision made by CRB to make webcasters pay for music played over Internet radio stations is effective on July 15 and will include retroactive payments dating back to January of 2006.

Some say that while this is merely an appeal for drastic change, this event could also be the end of the Internet Radio industry. We’ll know soon.