YouChoose.net, whose tagline is “Turning Passions into Actions,” announced the release of its YouChoose Widget.

“Most blogs and online news articles allow people to post a comment. But most sites haven’t developed the critical mass of users to appear active or induce comments. Adding the YouChoose widget to those websites provides that critical mass by supplying an immediate active community. When a blog or article is posted, relevant discussions that are taking place across the YouChoose.net ‘Distributed Social Network’ are immediately displayed on the blog or news site. These replace the usual ‘comment’ link,” Mike Dever, co-founder, explained.

Because that discussion is taking place across potentially thousands of other websites, there is an active community of participants that keep the conversation flowing. Any comment or reply posted on any of those websites is distributed across all of those websites through the YouChoose widget.

Fluid, Inc. today introduced Fluid Social, the fastest, easiest way for companies to create interactive merchandising widgets for social networking sites and personal pages such as iGoogle, blogs, Facebook and MySpace. Part of the Fluid Retail merchandising suite, which has been deployed by dozens of retailers, Fluid Social enables companies to leverage the assets already in use in their online store to create rich-media branded widgets.

Fluid Social is the first productized solution for distributed merchandising. Its full-featured administrative tools make it possible for marketers and merchandisers to control both brand and product content displayed in widgets in real time, without involvement from engineers. This means the widgetâ€™s content remains fresh, relevant and in sync with their on-site merchandising strategies. 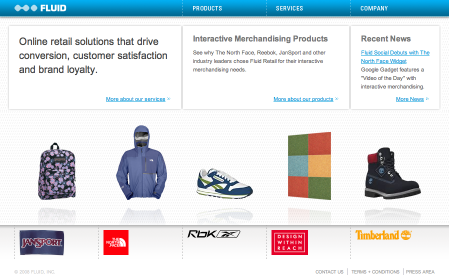 Netvibes announced that it has partnered with Sohu and Maxthon to expand its Universal Widget platform across Asia.

Maxthon is used by more than 30% of Internet users in China to browse the Web, and it is growing rapidly in the U.S. and other countries as word of mouth has spread through a network of enthusiastic fans. One reason for its popularity is its integrated widget platform, which has allowed users to develop their own plug-ins, or widgets, to expand Maxthonâ€™s already impressive list of features. 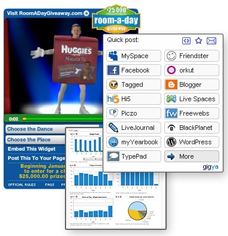 Gigya has launched its widget distribution network, which connects advertisers, content providers and social media users, to deliver and track results-driven widget advertising campaigns. Kimberly-Clark, Jive Records, 360i, and Avenue A | Razorfish, who is running multiple campaigns, are some of the charter advertisers achieving thousands of widget installs per day through the Gigya network.

The Gigya Widget Advertising & Distribution Network connects advertisers with a large audience of active widget and social media users â€” charging only when someone actively endorses a branded widget by choosing to install it on their profile page, blog or desktop â€” and by providing visibility into all of the ways individuals are interacting with a widgetâ€™s features and functionality.

By turning their widgets into apps, developers make their content available to Bebo’s more than 40 million users to instantly interact with and express their passions and interests to their online friends. The App Accelerator for Bebo provides developers with tools to create applications with minimal time and effort, thereby affording them more time to focus on creative content. In turn, Bebo users can then more easily access Widgetbox’s gallery of more than 30,000 widgets and apps and add their favorite apps to their Bebo profile page.