A Texas company announced today it has launched a “safe desktop and online environment” targeted towards kids age 3-11. This environment is called NoodleNet and it’s designed to be installed onto a PC.

NoodleNet acts as “a secure gated community with simple controls for parents and age-appropriate content pre-loaded for instant access to hundreds of screened games, books, videos, puzzles and online activities.” It uses a team of experts to review and approve Web sites which is considered age appropriate. The program is designed to lockdown the Internet experience, limiting control and exiting of the program to authorized people such as parents and caregivers.

“The relevancy today of both parental involvement and the need for a safe online environment has never been more evident,” said Michael Callahan, president of NoodleNet. “All of us here at NoodleNet are focused on leveraging our expertise and technology to create a truly unique consumer offering modeled around the family — one that will make meaningful impact in the lives of children. We are delivering an experience that truly enables the whole family or the individual child to explore the Internet without the parent or guardian ever having to worry or fear what their child may encounter. This is our assurance that children will not intentionally or unintentionally view inappropriate material online or access your desktop files.”

It’s all over the news, the blogosphere, the web. Google, the search engine giant as we know it, was ranked the lowest as to protecting the privacy of its users is concerned. This finding by Privacy International is based on six month research, placing Google at the bottom of 23 internet companies, including Microsoft, Yahoo, and AOL. Google is the only company among those included in the study to receive a failing grade for “conducting comprehensive consumer surveillance and having entrenched hostility to privacy.”

“We are aware that the decision to place Google at the bottom of the ranking is likely to be controversial, but throughout our research, we have found numerous deficiencies and hostilities in Google’s approach to privacy that go well beyond those of other organizations,” Privacy International said.

Google, on the other hand, has publicly refuted the report as inaccurate. “We are disappointed with Privacy International’s report, whichi is based on numerous inaccuracies and misunderstandings about our services”, Google’s deputy general counsel, Nicole Wong, said.

Privacy International is a London-based privacy NGO that provides technology asessement, develops reviews of policy, and acts as a watchdog on surveillance by governments and corporations. The full report, A Race to the Bottom – Privacy Ranking of Internet Service Companies, can be found here.

Bothered by allegations from Solidarity activists that he worked with secret police to sabotage the freedom movement, former Polish President and 1983 Nobel Peace Prize winner Lech Walesa has tapped the power of Internet to clear his name. He has published on the Internet more than 500 pages of police files kept on him by the communist-era secret police.

Walesa founded the Solidarity trade union in 1989, helped overthrow Communism, and became Polandâ€™s President from 1990 to 1995.

The files reveal this dispute is part of the secret serviceâ€™s strategy to destroy the Solidarity and even Walentynowicz and Gwiazda were manipulated by the secret police without realizing it. 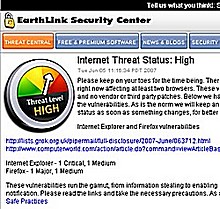 “The EarthLink Security Center is a comprehensive destination where consumers can go online to stay up-to-date on the latest virus and malware threats, better understand their computer’s potential vulnerabilities, find useful tips and information from industry experts and make more informed product decisions.” The EarthLink Security Center is meant for the typical Internet user who has limited time to search through multiple sites and wants a trusted guide to help make the appropriate security choices for themselves and their families.

IBM announces its acquisition of web application security and compliance testing software company Watchfire, in its plan to combine the Watchfire technology with its existing Rational software products.

Watchfire, known for its web application security tool AppScan, was founded in 1996 and currently has 189 employees. Terms of the deal were not disclosed, but it was said that Watchfire will continue to operate as an independent business unit. The acquisition will close in the third quarter of 2007.

This acquisition is the latest among security-related acquisitions by some of the leading IT companies such as Microsoft, Google and Cisco among others. Seemingly, these firms have been buying out security companies in response to malicious malware attacks that are proliferating the web today.