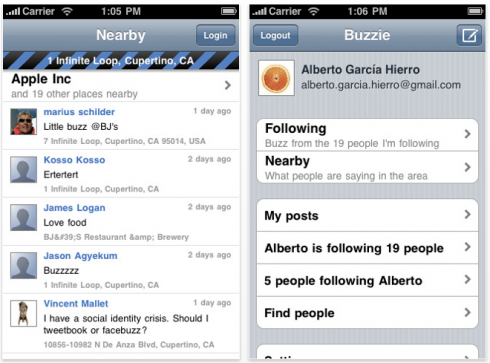 Why did it take an iPhone app developer to come up with the first native app for Google Buzz? Isn’t Buzz not too interesting enough to merit its own native iPhone? Frankly, I’ve been waiting for this one. In fact, I was expecting something like this to come out earlier.

Anyway, so there it is. Google Buzz now has its own native iPhone app and it’s simply called – Buzzie.

Currently selling for an introductory price of $1.99 during its first week run on the Apps Store, Buzzie lets yo do, well what you practically can do on the Google Buzz webapp. If you want to be specific about these features, it includes the following:

It’s a simple, straight-out port of the Buzz webapp, so don’t expect too much from it. And besides, what can you possibly expect from an iPhone of the web’s latest noise maker?, I mean online communication tool.

Simply put, Buzzie is good native app that would help you get your Buzz fix in a faster and easier way.

Will you use Buzzie? Or is the Buzz webapp enough for your buzzing needs? If you want to get this app, here is its iTunes Link.

The goal of this website is to raise some awareness on this issue and have people think about how they use services like Foursquare, Brightkite, Google Buzz etc. Because all this site is, is a dressed up Twitter search page (link). Everybody can get this information.

So, what does the site actually does? Well, controversial as well. It compiles and lists down all the status updates published on FourSquare and perhaps soon other location-aware services as well, that pertains to individuals saying that they are about to leave their homes to go somewhere else. These are posted on the site and on Twitter.

While Please Rob Me’s goal is unquestionably noble, the way it is pushing things to achieve this goal is not. Raising the level of awareness of the public over some dangerous matters is a good feat, but actually giving the would-be perpetrators an idea about this whole thing is certainly not commendable.

The site posts those updates on their Twitter account for all its followers to see and monitor. Â  They say that FourSquare, Gowalla and the others are just dressed up Twitter where updates live links that anyone can click through and access.

TweetDeck as many of you might not be aware of is not only a great iPhone Twitter application but it is also a great social media management tool for your desktop. Â Actually the TweetDeck iPhone app takes its roots from the TweetDeck desktop client. If you’ve been using TweetDeck on your desktop before, you’ll be glad to know that version 0.33 is now available and promises more great features to help you manage your social media life easier.

First of these new features is the extended API limit to 350 calls per hour. This gives those who configure TweetDeck greater flexibility without having to worry about running out of API calls. In addition, TweetDeck version 0.33 has also introduced an automatic API management option which is an ideal way for you to get the most out of your API allowance.

Next new feature – the Column Navigator which shows a representation of all your TweetDeck columns and lets you navigate through each of the columns quickly by clicking on them. Even more useful is the fact that when you hover over a bar in the navigator, key information about the column content will be displayed including the time remaining before the column refreshes and the current level of API calls remaining.

Other new features of TweetDeck 0.33 include – ability to edit definition of search columns and a brand new help screen.

When it comes to web broadcasting services, one of the most used that I’ve seen so far is Justiv.tv. Unfortunately, while I’ve found it a very good web app, I also find it rather complicated to use and set up. Until now, as Justin.tv just made its process of web broadcasting easier and faster.

According to the Justin.tv blog, they have overhauled the web broadcasting experience to make it easier to go live on Justin.tv. Â The new process eliminates all the required configurations and setup such as resubmitting forms, fiddling with Captchas, selecting categories, uploading images, selecting cameras, adjusting bitrate and other tasks. So with the new interface, you will now be spending more time creating live video rather than doing many chores to prepare creating video.

Initial assessment of the beta tests conducted on new users to Justin.tv revealed that 10% of them made it to the last step of creating web broadcasts, signifying a 700% increase from the old version prior to the launch of the new interface and simple process.Â Justin.tv now requires fewer settings which can even be skipped. And Justin.tv hopes that this could turn first-time users to become frequent live streamers.

Let’s see whether this simpler process of creating a live web broadcast would actually encourage new users as well as retain old ones.

If you’re in need of a tool to broadcast yourself or your friends online, you might want to check out Justin.tv again. Right now, CNET observed that the site is frequently being used by gamers. Something which keeps Justin.tv from going.

The GroundMap Application Demo from Eric Bieller on Vimeo.

We’ve seen various startups tried aggregating various social media streams such as tweets and Facebook updates. But none of them have utilized the power of geotagging. Until now, with new startup GroundMap and its new social media platform.

The idea is pretty simple and yet could be powerful. GroundMap lets you bucket geotagged social media streams and by that we mean all types of streams and not just tweets or reviews like what others are doing.

So, GroundMap lets you add PDF documents, YouTube videos, Flickr photos, Scribd documents, Google Maps, as well as Twitter and Facebook updates, under a particular geotag. All these streams become searchable on GroundMap by their locations or geotags and the platform presents it in a timeline format called GroundMap activity stream.

In addition, you can also search for activity streams using the tag cloud on GroundMap’s main page. It also allows you to add location which are not yet in the tag cloud. Once other users starts using the geotag, it’s appearance in the GrooundMap tag cloud increases in size – meaning the more relevant the tag has become.

While GroundMap’s concept may not be ground breaking as other services might have featured it before, what makes it different from the rest is its ability to give you different sources of social media under one tag.

GroundMap is a pretty useful online tool. Â It’s like other social bookmarking and recommendation sites such as Digg and Delicious done in a new way.

Check out the video demo for a more detailed explanation of GroundMap’s features.