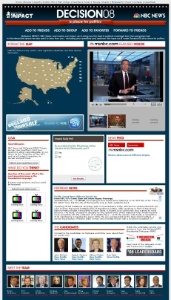 MySpace together with NBC News and msnbc.com announced an exclusive partnership to launch Decision â€˜08, a comprehensive online center for in-depth 2008 election-related news, analysis and discussion.

Decision â€˜08 presents up-to-the-minute election coverage, news feeds and daily videos from NBC News and msnbc.com, user-generated content from the MySpace community, and will link to profiles of NBC News and MSNBC anchors and reporters, including Brian Williams, Tim Russert, and Chris Matthews. In addition to offering its content via MySpace, msnbc.com will also link to and integrate Decision â€˜08 into its own Politics home page.

New media like blogs, social networking sites and mobile phones are becoming potent tools in politics. Itâ€™s very evident in the campaign of U.S. presidential hopeful Barack Obama. Another case in point is the recent election in Malaysia.

The Herald Tribune reports that Malaysian Prime Minister Abdullah Ahmad Badawi has admitted its big mistake of underestimating the power of the Internet. Though his coalition retained power, it failed to snatch the parliamentary majority because they relied heavily on government-controlled traditional media such as TV and newspapers.

On the other hand, the opposition has make the most of the Internet and text messaging to reach out to young voters and discuss the pressing problems in Malaysia like corruption, religious issues, and racial tensions. Through these initiatives, the group has increased its seat in the Parliament.

In case you miss the point, here it is again: Do not underestimate the power of the Internet. Or elseâ€¦

Admit it. Some people are born to annoy to the world. No, itâ€™s not the white hip hop Eminem. Iâ€™m talking about Dutch extremist Geert Wilders of the Party for Freedom and his anti-Koran 15-minute film, Fitna.

Fitna or the Arabic word for â€œdiscordâ€ has the power to provoke riots and violence particularly for Muslim countries such as Pakistan and Indonesia. Even the U.S. Department of Homeland Security and the FBI have warned about the divisive nature of this film.

Now, itâ€™s time for the online community to get back to this controversial Islam-hating persona. CNN reports that Wildersâ€™ official website for Fitna has been suspended by its host company for violation of terms of service.

Though every individual has the right to share his or her thoughts about the issues of our society, Wildersâ€™ call to ban the Qur’an and condemn this religion is way out of line.

Presidential hopeful Barack Obama is a phenomenal figure in the U.S. politics not only for his political acumen and rhetoric but also his charisma online music videos.

Chicago Sun-Times reports more and more celebrities are showing their support to Obama through online music videos. Aside from the smash hits â€œYes We Canâ€ from Black Eyed Peasâ€™ will.i.am and â€œI Got a Crush â€¦ on Obamaâ€, Twisted Sisterâ€™s guitarist Jay Jay French is the latest icon to join the viral campaign. French will turn the music â€œI Wanna Rockâ€ to â€œI Want Barrack.â€

Moreover, pop-funk band Fall Out Boy is rumored to participate in this initiative since the band leader appeared in Rolling Stone March 6 issue wearing an t-shirt displaying the Obama 08 logo.

Despite all the hype, the Obama remains mum about this trend.

With tomorrow’s Super Tuesday just a few hours away, here is a crash course on in elections.