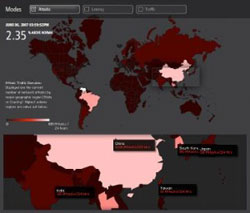 You’ve probably asked yourself at least once “why is the f’ing Internet so slow?” One way you may be able to get some answer going forward is Akamai Technologies’ new “Visualizing the Internet” tools.

These Visualizing the Internet tools, unveiled by Akamai today, let you see how healthy the Internet currently is. Akamai draws upon information from over 25,000 servers in more than 750 cities that are used by content providers to provide visual data of why some Web traffic may be slow, infected, or simply non-existent.

Three tools make up Akamai’s offering. A real-time web monitor “identifies the global regions with the greatest attack traffic, cities with the slowest Web connections (latency), and geographic areas with the most Web traffic (traffic density).” Network performance comparision “illustrates how Akamai identifies the fastest and most reliable path available between an Akamai edge server and an enterprise’s origin data center to retrieve dynamic content.”

The final tool, visualizing Akamai, “provides insight into the world’s online behavior at any given moment including how much rich media is on the move, the sheer volume of data being requested, the number and concentration of worldwide visitors, and average connection speeds worldwide.” This data is drawn upon the fact, Akamai said, that at times it handles 20 percent of the world’s total Web traffic.

Bambi Francisco‘s Vator.tv has relaunched as a startup video social network. It will serve as professional network and marketplace for ideas and businesses. Anyone, across all industries, at any stage, can share ideas, products, services and businesses with the rest of the world, mainly through video.

People can pitch their ideas, businesses, skillsets or needs, such as capital, partner or staffing requirements. Hence, the tagline, “What’s your pitch?” Through these pitches, people on Vator.tv can network, exchange knowledge and collaborate with other people who can help those ideas get to the next level.

Watch this video and see if Vator.tv’s pitch is worth supporting.

This is one for startupsâ€“ what is your vision? In this podcast sponsored by Wired News and the Harvard Berkman Center for Internet & Society, host David Weinberger asked Craig Newmark what his vision was when he started Craigslist. This podcast is a must. Listen.

Money is now digital, so why not your bank? Financial institutions large and small are rushing to open virtual branches, offering higher savings yields and lower interest rates to entice consumers.

And the competition is heating up, according to eMarketer‘s report “Banking and Bill Paying Online: Chasing Those Digital Dollars.”

But growth in the US online banking population is slowing. eMarketer estimates the number of consumers who have accessed their bank account online at least once in the past six months will grow 9.5% this year, to nearly 80 million, with growth falling to 6% through 2011, when 48% of US Internet users will conduct some form of banking online. END_OF_DOCUMENT_TOKEN_TO_BE_REPLACED 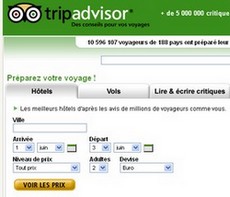 Showing its commitment to the European market, travel community Web site TripAdvisor has gain foothold into the French and German travel markets with its new sites TripAdvisor.fr and TripAdvisor.de

“TripAdvisor.de and .fr mark a major milestone in our global deployment. Travel is a global pastime and TripAdvisor represents the views, opinions and interests of travelers around the world, and we recognise that there are also important differences between nationalities. Travel planning and sharing information is one of the top uses of the web in both France and Germany and this initiative will provide those travelers with both unparalleled global access and a local focus,” said TripAdvisor Europe managing director Marc Charron.

Approximately two million travelers from France and Germany already visit tripadvisor.com monthly, indicating interest in TripAdvisor’s unique offering. France and Germany are an integral part of the TripAdvisor global community, and the company expects to see rapid growth in these markets, with the debut of localized sites.