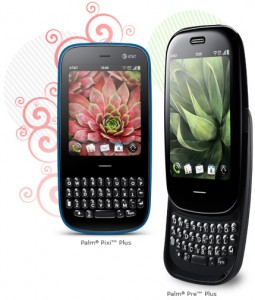 Knowing the lackluster performance of Palm’s dynamic duo, the Palm Pre Plus and Palm Pixi Plus did not discourage AT&T from getting the two smartphones. AT&T just announced that it will be releasing the Pre Plus and Pixi Plus with all the goodness of WebOS under its various data plans.

And are these data plans enticing enough to convince you in getting one if not both of these phones? Let’s see. Â AT&T is offering the Pre Plus and Pixi Plus for just $149.99 with $49.99 discount and a $100 mail-in rebate if you opted for a two-year contract. Â You will also get AT&T Wi-Fi access at U.S. hotspots as part of their unlimited data plan.

Both Pre Plus and Pixi Plus will support AT&T services such as AT&T Navigator, AT&T Address Book, YPMobile for finding local businesses. And of course, you’d also get to enjoy the specs and features of both Pre Plus and Pixi Plus smartphones running on Palm webOS. Â Among these features as multitasking on apps, Palm Synergy, unobtrusive notifications, and universal search.

In addition, Palm webOS apps can be integrated into core webOS functionalities includng contacts, layered calendars, notifications and GPS. You might as well add the rich catalog of apps available at the Palm webOS applications store.

So, what will it be? Palm Pre Plus and Palm Pixi Plus on AT&T or Google Nexus One? Come April 3, there will definitely be an influx of iPad applications trying to gain exposure on the iPad App Store. Â So, if you are a developer and you want your apps to be among the iPad launch apps, you better start finalizing these apps now and submit it to Apple for approval. You only have until March 27 to ensure that your apps will be featured during the iPad launch on April 3, say Apple.

Apple has issued the following guidelines to help you with your plans of submitting your iPad applications:

So there. You’ve got a whole week to prepare your applications and submit them to Apple for review. Since the it will only be a fews before the iPad App launch there’s a pretty big chance that your application will make it on time. I mean common, can Apple really review all the apps that will be submitted on March 27 thoroughly? Google has just released two new applications for all Android devices – Orkut and Google Buzz Mobile as a a widget. Â Interestingly, while Orkut Â may only be popular among in Brazil and India, this won’t stop Google from giving the site its own Android application. Besides there are probably thousands of Android phones in those two countries. Or perhaps with an Android app, Google hopes to get new members for Orkut.

The Orkut Android app is a pretty simple mobile social networking app which lets you keep in touch with your Orkut friends through live folders, photo uploads and scrap notification. 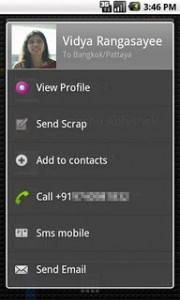 Live Folders lets you add the list of your Orkut friends as a live folder on your home screen letting you browse through the list even when your not under data network coverage. Â The app also lets you directly upload photos from your Android gallery to your Orkut photo gallery. In addition, the Orkut Android app also lets you receive notifications whenever you have new scraps on Orkut. This notification appears on your Android device notification bar and clicking on it will take you to your scrapbook page in Orkut.

The other application is Google Buzz for Mobile which was made available fairly recently. But for this update, you can now add Google Buzz as a widget on your Android phone’s homescreen. Â As a widget, Google Buzz lets you choose to tag your posts with the lcoation or place from which it was posted. It also lets you post buzz anytime, anywhere as well as share photos of where you are right now.

If you haven’t installed Google Buzz for Mobile yet on your Android phone, now is the right time to do so. Search for “Google Buzz” from the Android market. Once installed, you can add it to your phone’s homescreen by simply tapping on “Menu” Â and select “Add > Widgets > Google Buzz”

Have you often looked up to the sky at night and keeps on wondering what could be out there in the vast universe? Have you ever wished that you can check the sparkling stars and name each and everyone of them without using a high-powered telescope in some laboratory? Well, now you can, right smack on your computer screen. Thanks for Bing Maps and the World Wide Telescope (WWT) Â application.

The WWT application lets you explore the constellations and other known space objects similar to how you navigate through a regular Bing Map. It utilizes Microsoft Silverlight client right in Bing Maps and provides real time information about how the space is moving over the Earth. If you’ve been using Bing Maps before you’d pretty much have an idea how to go through the WWT application and navigate your way through the virtua stars and constellation unfolding right in front of you.

Now, here’s the coolest part. When you’ve selected a particular spot, you can click on it and the WWT application will shift to Bing Maps Street View. Giving you the sweet spot on earth where you should have been if you were actually looking at the sky using a real telescope. Sweet, right? This feature was demonstrated at the last TED event actually.

Want to go stargazing tonight? Check out the Bing Maps World Wide Telescope app. Make sure that you have Microsoft Silverlight installed on your computer to make the app work. Wait, but that’s not all that you can have on your BlackBerry device, but the whole Merriam-Webster dictionary lines via a mobile application developed by Paragon Software Group of California. The Merriam-Webster Dictionary app supportsÂ Â all BlackBerry Smartphones with OS version 4.2.1 and higher, except the BlackBerry Storm.

But before you check out the BlackBerry App World to download the app, be prepared to spend some extra dough since this apps are not for free. The complete line of Merriam-Webster’s Dictionary and their selling price are as follow:

If you see a need to have any of these Merriam-Webster Dictionary in your BlackBerry, go check out the app at http://www.penreader.com or at the BlackBerry App World.