MicroPlace, a wholly-owned subsidiary of eBay Inc. that provides an easy way for everyday people to invest in the world’s working poor by leveraging the power of microfinance attracted more than 1,000 new investments and nearly a half million dollars to the Calvert Social Investment Foundation (Calvert Foundation) between its launch on October 24, 2007 and the end of the last calendar year. These initial efforts have seeded a whole new online financing system that connects social investors with microfinance overseas, expected to grow to hundreds of millions of dollars over time.

With the launch of MicroPlace.com, for the first time, consumers in the U.S. can use the internet to make microfinance investments that simultaneously provide a financial return while addressing global poverty. Additionally, MicroPlace’s unique business model creates a self-sustaining marketplace that will serve as an efficient and scalable way for capital to flow into the microfinance industry. Through MicroPlace’s secure platform, everyday people can purchase investments â€“ for as little as $100 â€“ from microfinance security issuers. MicroPlace also enables investors to direct the impact of their investment to a specific country and microfinance institution in the developing world. The microfinance institutions use the funds to make small loans to the working poor, who in turn use the loans to start or expand small businesses and lift themselves out of poverty. Over time, this new model is expected to become an important capital source to meet the needs of billions of micro-entrepreneurs across the globe.

COO Stratton was vice president of business development for Turner Broadcasting System, Inc. (TBS, Inc.) prior to joining Digitalsmiths. While at Turner, he was responsible for developing and executing all non-linear platform partnerships and technology relationships across the web, mobile and VOD platforms. A 12-year Turner veteran, Stratton has played a key role in launching broadband and wireless products for CNN, Cartoon Network, Turner Sports, Adult Swim and Gametap, among others. He was also instrumental in forging relationships with strategic partners such as Amazon, AOL, Qualcomm, Yahoo, Google, Microsoft and Cisco in addition to all major wireless carriers and cable operators. Stratton received a B.A. from the University of North Carolina at Chapel Hill and M.B.A. from Wake Forest University.

CFO Weishaupt-Smith brings nearly two decades of financial experience in software and Internet technology to Digitalsmiths. She joins most recently from electronic medical records software company A4 Health Systems, where she was the CFO prior to the companyâ€™s sale to Allscripts Healthcare Solutions in 2006. Prior to that, Weishaupt-Smith served as principal financial officer of Total Sports Inc., an online sports media company, and held senior financial positions at SEER Technology/Level 8, Maxm Systems Corporation and BSG, Inc., a subsidiary of Medaphis, Inc. She has also served as a senior accountant and consultant at Ernst & Young International in Stuttgart, Germany and Raleigh, North Carolina. Weishaupt-Smith is a licensed CPA and holds a B.S. in Accounting from St. Leo College.

IAC has acquired a significant minority stake in The HealthCentral Network. Terms of the deal have not been disclosed.

The HealthCentral Network is a collection of over 30 owned and operated condition-specific and healthy living websites that combine authoritative health information with tight-knit communities of people, bringing together patients and experts to share wisdom and personal experience. The move marks a major push into the online health information space, and allows IAC to capitalize on THCN’s highly integrated online properties deeply focused on strong consumer-engagement.

In addition to the minority stake, Barry Diller and Peter Horan, CEO of IAC’s Media & Advertising sector, will serve on HealthCentral’s Board. In addition to this appointment, Mr. Horan will maintain responsibility for overseeing IAC’s health efforts.

The site allows customers to see what is popular in their area, preview the latest titles, search by title, director or genre and much more. Parents can use twondemand.com to keep abreast of the latest parental controls and get tutored on using them. Customers can upgrade to digital cable, sign up for a premium channel like HBO or simply view trailers from the hottest movies and shows. 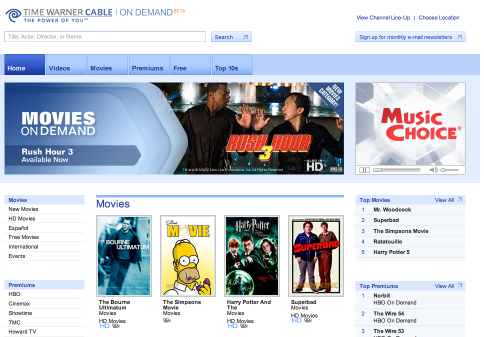 Capzles, Inc., a social media company that provides users the ability to share their stories through visually rich multimedia timelines, launched today via private beta. Capzles users are able to combine images, video, audio and blogs/text posts to create their dynamic, compelling story “capzles” which they can share.

Capzles offers people the means to create colorful, interactive time capsules to arrange their personal multimedia into narrative stories that others can follow step-by-step. With a savvy design, unique, easy-to-use Flash interface and robust back-end technology, Capzles provides an effective solution for anyone, from consumers to corporate brands, to share their stories. The complete Capzles experience is a broad universe of stories searchable through topics and time, and accessible through an intuitive map of time. While the stylized design and ease-of-use are compelling for users, the time-sensitive storage of valuable personal history is equally so.