Pardon the momentary glitch a couple of hours after its official launch, but Vevo is up and running right now (if you’re in the U.S. at least since the site is not available in most countries). And judging by the way its launch gig went and the support it is getting from major industry players including music artists, it looks like Vevo is headed for big time success.

What if you have Bono, Lady Gaga, John Meyer, Mariah Carey Â and Adam Lambert promoting it? Plus Google’s Eric Schmidt Â allowing all views of Vevo videos on YouTube to be attributed to Vevo? It’s a clear shot to video site stardom, right? Â It looks like Vevo might become the no.3 video site next to YouTube and Hulu perhaps.

Vevo executives expect their site to get more than 400 million video views in the site’s first month of operation. While Mariah hopes Vevo can help salvage something that used to be amazing. Advertisers are joining in as well with the likes of AT&T, McDonalds and other industry players coming on board.

Could Vevo give Hulu a run for its money? Only time can tell. What Vevo needs to do right now is to prepare its site for unsurmountable traffic in the days to come and avoid downtimes as much as possible because that will somehow determine the site’s future.

Frankly while I was reading TechCrunch’s pitch for newly launched movie-related site MovieClips.com, I couldn’t help but be excited by the loads of goodies the site is offering. I mean how does 12,000 two-minute streaming clips from 20th Century Fox, MGM, Sony Pictures, Universal Pictures sound to you?

If those were not enough to convince you that MovieClips.com might actually be the next big thing to online video-movie niche, well how about if you knew that MovieClips.com is social too? Meaning, you can favorite or “hype” movie clips, comment on them, or simply share the movie clips with your Facebook, Twitter, Digg and other social media contacts. END_OF_DOCUMENT_TOKEN_TO_BE_REPLACED 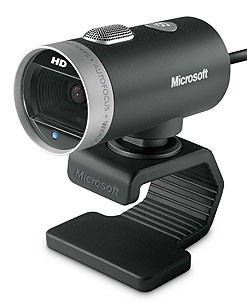 Microsoft has decided that there’s enough interest in high definition videos online now and has released what it claims is the first consumer webcam with a 720p sensor on board.

I know we don’t usually cover hardware at 901, but this is more about Microsoft’s attitude towards HD video online than it is about the webcam itself.

Marina “Hot For Words” Orlova, the double-degreed Russian philologist who made a name for herself on YouTube by explaining the etymologies of various words, just came out with her first book. The self-titled tome from Harper Collins features 280 glossy pages of Marina serving up the origins of eigthy words and phrases — with matching pictures of Marina, of course.

As a revenue-sharing member of YouTube’s partner program, Marina represents a new generation of self-made online video celebrities. Unlike many of the buxom blondes of previous media, Marina handles every part of her new media empire, and interacts very directly with her fans. Just to provide an example of Marina’s highly technical hands-on approach, her latest tweet calls out a major tech blog for recommending an IE7-incompatible widget. When was the last time you saw a celebrity babe do something like that?

If you’ll be at the San Diego Comic-Con today, Marina will be selling autographed advanced copies of her book from noon ’til 2pm.

comScore released its July 2008 data from the comScore Video Metrix service, reporting that Americans viewed more than 11.4 billion videos for a total duration of 558 million hours during the month.

In July, Google Sites once again ranked as the top US video property with more than 5 billion videos viewed (representing a 44 percent share of the online video market), with YouTube.com accounting for more than 98 percent of all videos viewed at the property. Fox Interactive Media ranked second with 446 million videos (3.9 percent), followed by Microsoft Sites with 282 million (2.5 percent) and Yahoo! Sites with 269 million (2.4 percent). Hulu, the supposedly YouTube killer, ranked eighth with 119 million videos, representing 1 percent of all videos viewed. 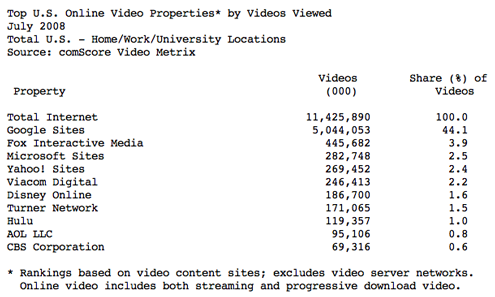