Known for ABC’s “Shaq’s Big Challenge”, an American reality series featuring Shaquille O’Neal, RDF USA enters the online video scene for the first time, and by partnering with DailyMotion, they get an access to 37.5 million unique users around the world.

With DailyMotion being launched officially in the US last month, YouTube could be facing a big threat. DailyMotion overtook YouTube last May in France; and got 3.2 million unique users in the U.S. second to YouTube.

“While it will clearly be very difficult for any video site to replicate what YouTube has accomplished, DailyMotion.com is stating the strongest case at the moment, both domestically and internationally,” said Erin Hunter, executive vp media and entertainment solutions at comScore.

Max Benator, head of RDF USA’s digital division, commented: “It’s really exciting because they have amazing traffic. It’s been untapped by the entertainment community, so we see this as a great opportunity to be one of the first producers to get access to those eyeballs.”

1 of 5 Americans view video over internet everyday, a study made by Pew Internet and American Life Project says.

Essentially, this Pew study shows that on a typical day, 19% American adults watch some form of video, news being ranked number one followed by comedy vids. According to Mary Madden, senior research specialist at Pew, people have gotten comfortable with the idea of using the Internet for video, especially news outlets which are among the first to deliver online video.

Also, about 50% of video viewers within the 18-29 age bracket watch clips on YouTube, 15% view MySpace, in contrast with only 7% who turn to a cable or network TV site.

Apparently, having a high-speed internet access is an important element in accessing video sites. It turns out that 25% of those with broadband connection watch video on a regular day, while only 9% with dial-up connection do so.

This telephone survey of 1492 internet users was conducted Feb 15 to March 7. 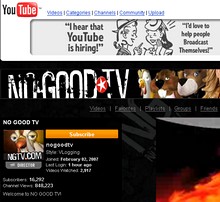 NO GOOD TV, the world’s largest producer of uncensored celebrity news and entertainment programming, has surpassed 58 million clip views in less than five months without off-site advertising or paid promotion on YouTube.

Verizon Wireless said today that if you are a customer and also a user of YouTube you’ll be able to connect the two easier through your Verizon mobile phone so you can both send and enjoy YouTube video. Verizon says its the first in the nation to offer mobile users the ability to send recorded video to YouTube.

Verizon customers can record video through their mobile phones and then upload those videos directly to YouTube using the number YTUBE (98823). Users must first link their phone with their YouTube account through the Web site. Videos posted will reportedly be available to view in minutes.

Verizon also made mention of how users of V Cast-enabled phones can access a selection of YouTube videos through the YouTube channel on V Cast. The V Cast service costs 3.00 for 24-hour use or $15.00 for a monthly subscription.

AT&T Inc. has announced the nationwide launch of AT&T Video Share in nearly 160 markets. Video Share is the first-ever service in the U.S. that enables users to share live video over their wireless phones while on a voice call.

“For consumers, the service offers a new, easily attainable, level of connectivity. With the streaming video, users can ‘see what I see, when I see it.’ It’s a dramatic new way to share personal moments and events beyond the capabilities of voice and text,” said David Christopher, chief marketing officer of AT&T’s wireless unit.

AT&T Video Share enables one-way live streaming-video feeds that can be seen by both parties while they are participating in a two-way voice conversation. Once the parties have initiated a Video Share call, either one can be the one generating the video stream for the other to see.