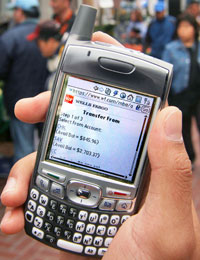 The many customers of large bank chain Wells Fargo have a new way today to access information on their funds via their mobile phones. Wells Fargo Mobile, a browser-based mobile banking solution, has been introduced on a nationwide level.

Wells Fargo Mobile users, once enrolled in the service, can visit the mobile URL wf.com to view balances of checking and savings accounts, mortgage, home equity, brokerage, auto loan, student loan, and credit card accounts. Transaction history can be accessed and money can be transferred between eligible accounts.

Wells Fargo covers the mobile based service with a security guarantee and says it uses the same layered security approach and technology as all sessions on wellsfargo.com. The bank chain, which operates over 6,000 locations, first introduced online access to banking accounts in 1995. 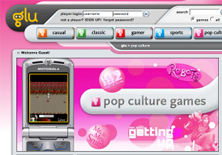 Glu Mobile Inc., publisher of mobile games, announced an agreement with PopCap Games, developer and publisher of casual games, to extend the companiesâ€™ multi-year, worldwide partnership to publish three of PopCapâ€™s most popular games, Zuma, AstroPop and Insaniquarium for the mobile platform.

Through the agreement, Glu will continue to publish these mobile titles to new handsets and a growing list of carriers around the world. Glu developed and published the mobile adaptation of Zuma in early 2005. AstroPop launched on mobile later in 2005 and Insaniquarium in early 2006. Glu has deployed the titles throughout the world through its partnerships with more than 150 carriers and distribution partners in 65 countries. 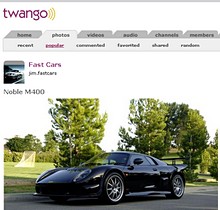 Aiming to strengthen its corporate and multimedia offering through acquisitions, top mobile phone maker Nokia is very interested to buy Twango, a photo-sharing social networking Website. However, price is not yet disclosed.

“The Twango acquisition is a concrete step towards our Internet services vision of providing seamless access to information, entertainment, and social networks,” Anssi Vanjoki, head of Nokia’s multimedia unit said in a statement.

AT&T Inc. has announced the nationwide launch of AT&T Video Share in nearly 160 markets. Video Share is the first-ever service in the U.S. that enables users to share live video over their wireless phones while on a voice call.

“For consumers, the service offers a new, easily attainable, level of connectivity. With the streaming video, users can ‘see what I see, when I see it.’ It’s a dramatic new way to share personal moments and events beyond the capabilities of voice and text,” said David Christopher, chief marketing officer of AT&T’s wireless unit.

AT&T Video Share enables one-way live streaming-video feeds that can be seen by both parties while they are participating in a two-way voice conversation. Once the parties have initiated a Video Share call, either one can be the one generating the video stream for the other to see.

A&E Television Networks and MobiTV, Inc., the leading provider and platform for content delivery over mobile and broadband networks, today announced the launch of A&E Mobile and The History Channel Mobile. The made for mobile channels are available today on the MobiTV service via participating mobile carriers throughout the U.S.

The creation and distribution of A&E Mobile and The History Channel Mobile to wireless video subscribers in the U.S. is a step in AETN’s overall digital strategy to deliver its programs and services to viewers on multiple platforms.

“The mobile platform is an increasingly important interactive screen that provides our consumers with access to our branded programming wherever and whenever they want it, and we are pleased to partner with MobiTV to offer A&E Mobile and The History Channel Mobile to viewers,” said Paul Jelinek, Senior Vice President, Digital Media, AETN. “These mobile channels enable us to offer a new service to our existing audience, and through cross promotion, to bring new viewers back to our linear channels.”